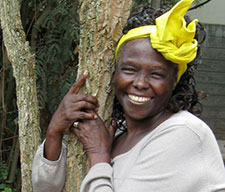 Taking Root is the most comprehensive, in-depth film about Wangari Maathai available. It was made in close collaboration with her during the last decade of her life.

Taking Root has been translated into 12 languages and is now available at no charge for online streaming and downloading if you are a qualified individual or organization. These new multiple-language international editions were inspired by Wangari’s intention to support communities around the world who are dealing with deforestation and connected issues.